LatCrit grew out of a seri 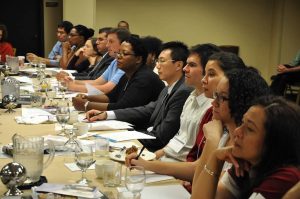 es of Critical Race Theory meetings during the late 1980s and early 1990s. The earliest meeting took place in San Juan, Puerto Rico in the form of a colloquium under the auspices of the Hispanic National Bar Association (HNBA) in 1995. In 1996 LatCrit organized its first annual conference. Since then, LatCrit has organized a series of meetings that include a Biennial Conference (since 2011),  colloquia and other collaborations, the South-North Exchange (SNX), the Colloquium on International and Comparative Law (ICC), and other meetings in Campo Sano.